The weather was mild and the visibility was fair. The ancient Airbus A300 was sluggish and she listed slightly to the right when at full throttle. The stick was muddy too, like stirring a viscous porridge. The 3:30 AM sky offered no light save that of the flashing runway. It was then that my copilot’s heart failed from some form of poisoning.

The sweat formed on my brow as my white knuckled hands grasped the stick in hopes that I can bring this bird back to earth and survive to tell the tale. Fear not dear reader. For I will be your humble captain. It wouldn’t be the first time and wont be the last… 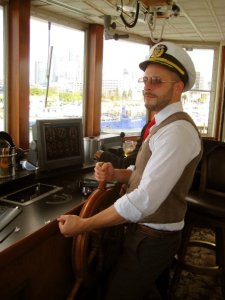 I’ve also had to take over for Steamboat Willie when he suffered from terrible hallucinations during a routine upriver search for Colonel Kurtz AKA Goofy Kurtz Brando IV.

I even had the forethought to film the entirety of Steamboat Willie’s mental breakdown. Here’s the worst fifteen minutes of it.

So when my copilot suddenly dropped dead after being poisoned by the ninja assassin I thought was safely stowed in the back, there was only one thing to do. Go to the cargo hold and have a smoke. And then find that ninja. 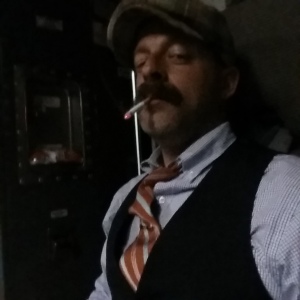 Can you see him? He’s really good…

Just kidding y’all. I’m no pilot. I did however steer that big ass boat during a bottomless champagne brunch cruise. That did happen. Oh, and Steamboat Willie really is nuts. But the truth is slightly less dramatic regarding the 3:30 am flight from LAX to Mexico City (with a stop in Mexico that I can’t recall the city’s name).

You see, I was on a courier trip for my museum and we were shipping about 80 crates of fine art for an exhibit at the Palacio de Bellas Artes (Palace of Fine Arts) in Mexico City. So I did have to protect the art from ninjas. And all other forms of mishandling or thievery. we’re talking about millions and millions of dollars worth of art here folks and you can’t just send any old schlubb to protect it. You need a manly mustachioed jackass with a rapier wit and quick reflexes. He wasn’t available, so I stepped in.

My day started by loading up the crates into several trucks and driving from San Diego to Los Angeles to a cargo facility next to the runways. From about 1:00 pm until 3:00 am I waited for the crates to be processed and palletized. Those many hours looked like this. 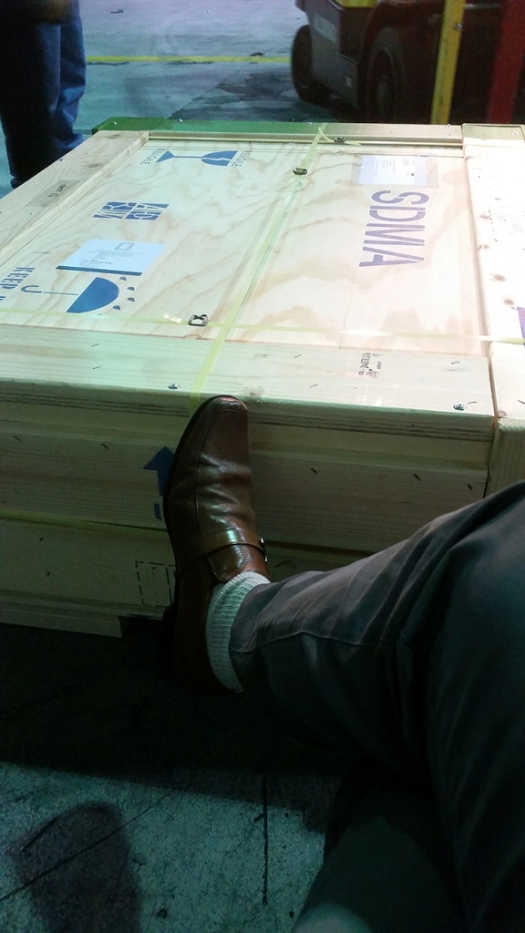 Make note that the crate has moved. This was very exciting in the tenth hour. Then the crates slowly became wrapped and ready. I can’t show you too much from the trip regarding the art for security reasons, but here’s a few shots.

Then around 3:10 am, I receive news that my plane is loaded and we are ready to go! At last, some action. And lucky me, I got the plane with the old fashioned jump seats. You know the ones. Exactly like in the movie Castaway with Tom Hanks.

Yes, well let’s hope for slightly better results on this flight eh captain? Just in case I did bring a volleyball named Wilson for companionship. Oh Wilson, I AM sorry.

Now this flight was supper bad ass for three reasons. The first being that I was so sleep deprived that a general stage of mystical goofiness resided in my brain. The second was when the captain invited me to sit in the cockpit during the takeoff, landing, takeoff and final landing. One of the coolest experiences I’ve had in a long time. He would not however allow me to take the wheel despite my constant protests and requests. “you look sleepy man, perhaps I should fly for a while?” “No senior, no Bueno!!” You can see a video of one of the landings below.

However, the third super bad ass thing about this flight was when I walked onto the plane, I could definitely smell the ghostly scent of stale cigarettes. Grant it, I’m not proud of being a smoker, but I do seem to enjoy doing it so there we are. Don’t judge and, yes, I’m aware. So I posed a quandary to the captain; if you guys smoke on this plane, don’t stop on my account! Everyone’s eyes lit up as we all realized that we were all in on a secret. So, we smoked. Yes, that photo above is a human being smoking on a plane! How very Mad Men of us.

Here’s a photo of the outside of the plane when we landed somewhere in Mexico. Somewhere I can’t recall the name of.

I arrived in style. Loopy and discombobulated style.

We unloaded some cargo, went through customs and were air born again in short order. Next stop was Mexico City!

I have some videos posted on my YouTube page, but I wanted to share this one with you especially. It’s us landing in Mexico City the following day. It was sometime around 10 am, but I can’t be sure as I was way out of it by then.

What a way to see a city for the first time! I will fast forward the doldrums of the next several hours. It involved another boring stint at a cargo facility and the loading of several tucks. About three hours later, we were on route to the Palacio de Bellas Artes (Palace of Fine Arts) to unload our cargo at long last. We arrived sometime around 5 or 6. 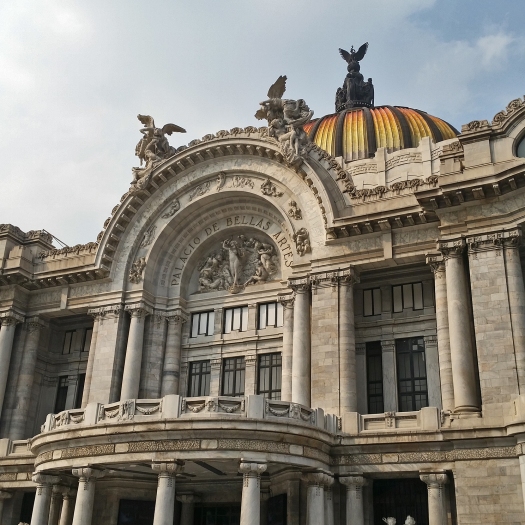 Even though I hadn’t eaten anything in sixteen hours, nor had I slept in about thirty hours, I was still extremely impressed by the grandeur of this impressive marble building. On that note,  I should mention that the building is indeed actively sinking into the earth. As is the building across the street. 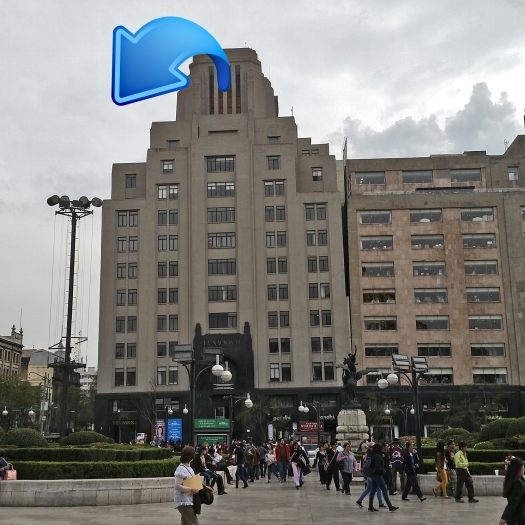 My first impressions of Mexico City were, “Wow! this architecture is breathtakingly beautiful!” My second impression was, “Wow! This city is breathtakingly grimy!” The pollution and black viscous slime blanketed what appeared to be an amazing and beautiful underlying city. A city steeped in culture and history. And masses of people. Millions of them ( almost 9 mil.) in fact. And you can feel it and smell it in the air. The effect that that many people have on an environment is thick and palatable.

And on every street corner and across every beautiful and expansive plaza, the strong presence of The Man. Cops that look more like soldiers are EVERYWHERE. And in full on riot gear and often with machine guns.

Now, regarding the law, there are generally two kinds of people in this world. Those that feel protected when the cops are around and those that feel very uncomfortable. I fall under the latter. It’s not that I have the guilty mind of a criminal, it’s just that I’ve seen way too much abuse of power to simply feel comfortable around people with guns, armor and a penchant for smashing skulls with blood soaked batons.

I’ll bastardize a quote from Bukowsi if I may.

I don’t hate cops. I just seem to feel better when they’re not around.

But I digress, lets unload those crates so I can get my ass into a steak and scotch dinner, a shower and a hotel bed seeped in unknown and invisible stains.

Like a colony of ants hungrily dissecting a larger grasshopper, the museum workers swarmed the three trucks full of crates.

It was hard to keep track as I was very weak form my journey and lack of food. I also discovered that this institution does not have a single freight elevator so every single crate (and they were very heavy) had to be carried by hand up several flights of slickly polished marble stairs.

This process went on for another few hours, my head racing with visions of large heavy crates tumbling down unforgiving stairs crushing all in its path. Good lord, the paperwork!

We finished up around 6 pm local time before I slithered into a taxi to head to our hotel.

By the time the steak and scotch was in front of my gaunt face, 36 hours had passed on the clock. I began to fall asleep in the hotel restaurant before the check arrived. After a shower, my head finally hit the pillow and my long journey was over. for now.

Coming in so late to the museum afforded me a luxury of the following day off! An unexpected treat. You see, the interior climate of the crates was equal to that of San Diego, not Mexico City. So they have to sit for at least 24 hours unopened to acclimate to their current surroundings.

Thank god for this tidbit of science and conservation. Because now I could do what ever I pleased! This did not include sleeping in however. Instead I opted on a tour van trip around the city and finally to Teotihuacan! You know, where the pyramids are…

Stay tuned for Part II in which our hero performs a human sacrifice. An organic one of course.

What's on your mind? Cancel reply