Now here’s a project that doesn’t take too much time and is simply perfect for the whole family. The materials used for this are all items you can hunt for in parks or woods and make for a great excuse to go on a hike. With a little help from adults, kids can have a blast assembling these amazing and beneficial homes.

What I’m looking to attract are solitary bees. Many people think that honey bees and bumble bees are the only types of bees around. The fact is that they only represent about 10% of the bee species around and aren’t even native to North America. A majority of bees don’t make honey, but one thing that they do make is excellent pollinators!

Just one solitary bee, like the mason bee, can do the pollination work of 120 honey bees! They lack the little pollen baskets that honey bees have so they visit flowers way more often than social bees. And because they don’t have that golden treasure trove to protect, they don’t swarm and are safe around people and pets. There are three basic types of solitary bees but all come in varying shapes and sizes.

A male mason bee emerging from his chamber. Via http://bugguide.net/node/view/262500

Solitary bees will either chew tunnels with their strong mandibles (like the carpenter bees) or they will seek out existing burrows left by beetles or hollow stems (like the mason or leaf cutter bee) to lay their eggs. They’ll crawl to the back to deposit an egg and then leave a lovely little packed lunch of pollen and nectar for the baby to eat. She’ll leave just enough room for the larvae to develop and then seal it off and repeat the process until the cavity is filled.

She can control whether the egg is male or female and lays females towards the back as males hatch before females do. That way the bees can emerge without blocking one another. I guess at least in the bee world, the males mature faster.

These types of bees are so often overlooked when people think about the recent decline in pollinators. Yet they do far more work than the honey bees do in that regard. All the more reason to do a cool project like making a place for them to live. Urban environments are not very forgiving when it comes to providing a home to these useful critters. Gardeners seldom leave dead wood laying around or old stems from plants that the bees would normally call home.

So not only is this a simple and fun project to get the whole family involved in, you’re doing a great service which will only provide you with enrichment as well as a bountiful crop! You and the kids can monitor the tunnels and see what variety of species have moved in. On rainy days, you’ll see them in there staying dry but most of the time you’ll know they’re using the home when you see the ends sealed up. This would also make for a great project for schools, especially those that have gardens.

So let’s get to the fun part…the building of the house. END_OF_DOCUMENT_TOKEN_TO_BE_REPLACED

The results are in for the Official MYD Name my Hens Contest™ and it was a close one folks! In the end, the hens decided on their favorite names. I had absolutely nothing to do with the decision making here and am but a slave to the whims of tiny dinosaurs.

Congratulations to Miscellinnie and Nury for the name of Bernie for my plucky Rhode Island Red and to Jack Burton for the name of Hen Solo for the adventurous Black Sex Link.

They took their sweet time in deciding too and when I placed the dry-erase board in the coop for their brainstorming sessions, they tended to poop all over it. But, then again, they tend to poop all over everything. However, after much deliberation, they finally have selected their favorites.

Ronald Reagan was the next runner up for the Rhode Island Red so kudos to the husband of Jenny from Bulldog Travels for that brilliant name!

Sasha was finally able to meet the hens face to face too. I wanted to make sure that my training methods still applied to new additions to the flock. They did in spades! 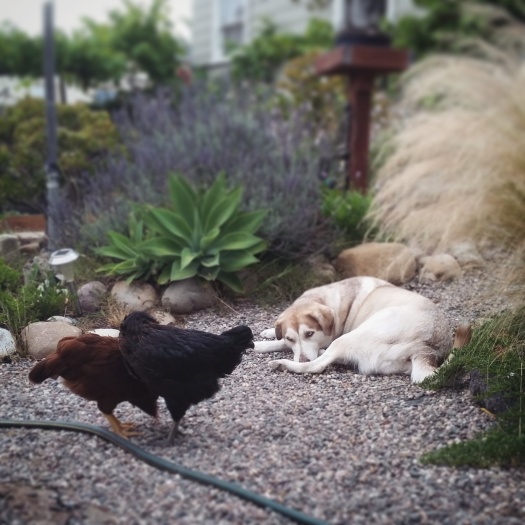 We then did a nice photo session to help celebrate their new names. I’ve photographed a lot of subjects in my life and can safely say that chickens are one of the hardest things to shoot. The only thing harder was when I shot Buffalo Sabers games back in college. So much movement and with a shallow depth of field, damn near impossible to get the eyes in focus. So, out of the 150 photos I took, here are 14 that turned out decent. Enjoy!

Bernie as lord of the dance

The first taste of grass seeds

And for those of you that are not sick and tired of looking at chicken videos, here’s the girls playing around in the adult section of the chicken run for a supervised play-date with the big mean girls.

I love watching them jump around with excitement like the little kids that they are. Especially in the beginning where Hen Solo tries to eat citrus leaves from the satsuma tree. Silly Solo, the scruffy looking nerf-herder.

Thanks again to all those that helped with your amazing submissions!

As it was foretold in the ancient scrolls, my little “hobby” of raising backyard chickens is slowly but surely turning into a full on addiction. And as any addict would, I just scored another fix. As soon as it hit my coop, I could feel the warm release course through my veins.

This must be what William S. Burroughs felt like…every day of his life (that lush).

My small handful of egg customers is continually clamoring for their own fixes. In the form of the weekend scramble. These cats are hip to the health benefits of organic free range eggs as well as the tastiness. They can dig it man (Shout out to Chacho and Becca).

So I thought it best to up the production schedule just for them. Not for my addiction. Nope, totally selfless activities going on over here. *ahem*. You buying any of that?

I’ve also decided that I should create a fancy new official Mind Your Dirt Excelsior Class Egg Carton™ to help sweeten the deal. Here is the first prototype.

I spared no expenses in the ridged stress testing and prototype structural integrity testing. Mind Your Dirt scientists worked around the clock for countless milliseconds of analysis. The proper shade of green was achieved by collecting different algae from the greatest depths of the seven seas and carefully separating the proper rhizomes to create the perfect dye.

That, or I ordered them online. I can’t recall which is the case. Regardless, I am taking steps to increase my egg output and in doing so have employed the efforts of these two fine hens to chip in. Which is what brings me to your humble Interwebs doorstep this fine morning.

I’m not selling anything, and just need a moment of your time. Is your wife or husband at home? Perhaps they would also like to hear what I have to sell…er, I mean say.

Welcome to the official Mind Your Dirt Name My Hens Contest™!

We will be selecting two winners, one for each hen named. The grand prize for the two winners will be…the satisfaction of knowing that I will be yelling these names while in a bathrobe running like a maniac around my yard trying to herd these energetic little bastards!

Second and third place contestants will be awarded the semi-satisfaction of knowing that they almost won first place! Double and triple huzzah!

Sounds to good to be true? No. No it doesn’t

Basically, I simply want my readers to be a part of my grand experiment in urban farming. That way we will be connected beyond the flashing screen and unified in animal husbandry bliss.

That said, here are the little beasts to be named:

[Insert name here] is a plucky yet shy little Rhode Island Red. She enjoys poops on the straw and relaxing with a good snail on top of my head. When she gets older, she hopes to work as a part time model. But she really thinks she should keep her day job as she enjoys the dental benefits.

[Insert name here] was hatched in the fires of hell and raw untamed passion. This Black Sex Link is a mix between the Rhode Island Red rooster and the Barred rock hen. She enjoys openly defying the Master of the farm and has no time for being confined in her run. She can officially fly higher than any of my adult hens and is begging for a wing clipping. When she grows up she plans to be hell-bent on global domination while sporting a stylish pantsuit.

So the challenge has been laid before you. Contest rules are simple: there are no rules. Simply leave your votes in the comments below and I will read each one aloud to these chicks and see which ones they choose. Good luck everyone!

The results are in!