Being a first time home owner puts one in a position to be bombarded from all directions from all sorts of brand spankin’ new challenges. Just finding a home that won’t be taken from you with hordes of cash offers in Southern California is maddening. I believe at last count, I put in about 60 offers on houses. You get to the point where you don’t even have time to see some houses in the flesh, it’s gone that fast.

Buying my first home left me in a more than frazzled state. As it turned out, the first home I put an offer on was the last home I put an offer on. In the 3 months in between, it was bought by an investor, completely flipped and then put back on the market. I was at the end of a short and frayed rope, so when I saw it again in the listings, I jumped fast. I was drawn to this home and it seemed kismet that it should grace my agents listings yet again.

There were a great many things that I took for granted as a renter. Clogged drains and toilets for example. Another was paying the water bill. All the plants on my cement patio were never lacking for thirsty drinks. My showers could linger a bit  to sooth aching muscles. Water balloon fights could happen at the drop of the hat. Not that they did, but they could’ve and without fret or remorse.

When I finally got my house, I, being me, immediately set out to the yard to let my imprisoned plants let their roots stretch deep. I watered them freely and often. Oops, got some dirt on the driveway. No problem! Blast it with the hose. Easy. This went on for the first two months. Everything was gleaming and bright and all was right in the world. Home ownership is a snap!

Then, the first water bill arrived. I remember thinking, “Oh shit, I have to pay for the whole blocks water usage?!” It was gigantic. Epically so. My illusions began to shatter in this manner when every new bill arrived. I began to get very humble and spendthrift almost overnight. Showers were for special occasions and how many times can I wear those pants before they could walk around on their own? Friends would ask, “Hey, when’s the next famous James Gielow water balloon fight?” I would hang up immediately.

Yes, water conservation is a hugely important environmental issue. Yes, we are still suffering from this year’s drought. Yes, this is all very important to me. But you know what really gets my attention as a “green” human? My bank account dwindling away. That gets me granola really fast! I could feel the dreadlocks forming and smell the patchouli in the air. Is that a hacky sack and juggling sticks I see?

So I conserved like the wind. Then I started thinking about doing more. My girlfriend wasn’t appreciating my newly found anti-shower/anti-laundry ways as much as I hoped. Additional steps needed to be taken. And thusly, the poor mans greywater system! Was that intro too long? Sorry, I do prattle on so.

I have zero rain gutters. It never rains in Southern California, as the song goes, so not a huge financial priority. Yet. I determined that the most water used, apart from irrigation, is the washing machine. That beast is mighty thirsty. If I can harvest that water, then I can cut down on irrigation as well! I began researching rain barrels and found one that had a flat back and looked like a wine barrel. How quaint! I’ll buy it. It turns out that the city of San Diego also offered a $75 rebate towards the purchase as well! Good city, nice city. The barrel ended up costing me around $30 after the rebate.

Detergent was the next big hurdle for me. There are many brands out there that claim to be safe for greywater systems, but as it turns out, many of them have high salt contents that will do more harm than good for the garden. This just won’t do! After some trial and error, I finally found one detergent that is actually good for your plants. Most claim to be safe, but they’re thinking about you, the consumer, being chemical and fragrance free, not your soil! Be careful and do the research or else you’ll accidentally destroy the salinity balance of your soil. We must always MIND OUR DIRT! Don’t use Seventh Generation! It’s great for chemical free living, which I wholeheartedly support, but it’s bad for your soil! I found one that will biodegrade entirely into plant nutrients and is designed and tested to be biocompatible with plants and soil. Go with Oasis Laundry Detergent. Trust me. It looks like this… 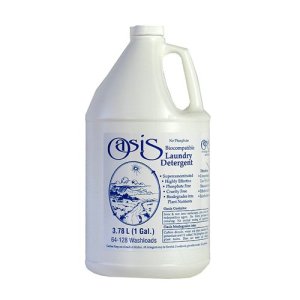 I know what you’re thinking right now. At least I think I do. You’re thinking, “that cheap hippy water ain’t gonna do squat for my tighty whities!” Firstly, you should use better grammar in your thought processes! Secondly, this stuff works simply perfectly. I’ve noticed no loss in the quality of my laundry at all. Smells fresh and gets out stains to boot. You can also try soap nuts, which are a type of lychee seed that I hear-tell also work really well (look it up). I can’t vouch because I’ve never tried them, but I’m drawn to the idea of using seeds to clean the boxer briefs.

Once I got the detergent figured out, I bought some PVC pipe from the Home Depot, some pipe cleats and carefully and hesitantly drilled a 1″ hole in my beautiful garage wall. I dry fitted all the pipes to make sure that everything lined up with my new barrel and then set to gluing them together. Here’s the inside next to the washer.

The beauty of this is, if I ever need to bleach something or use some unsafe chemicals, I can just pull out the black tube and let it drain into the sink like it used to do. I rarely do, however, so almost all of the water is now reclaimed. On the other side of the wall, I ran the PVC at a slight downhill angle towards the rain barrel at the back of the garage right next to my vegetable garden.

Easy breezy! This rain barrel holds 55 gallons of water and the water is then gravity fed out the spigot at the bottom. After a quick test run, I was in business! 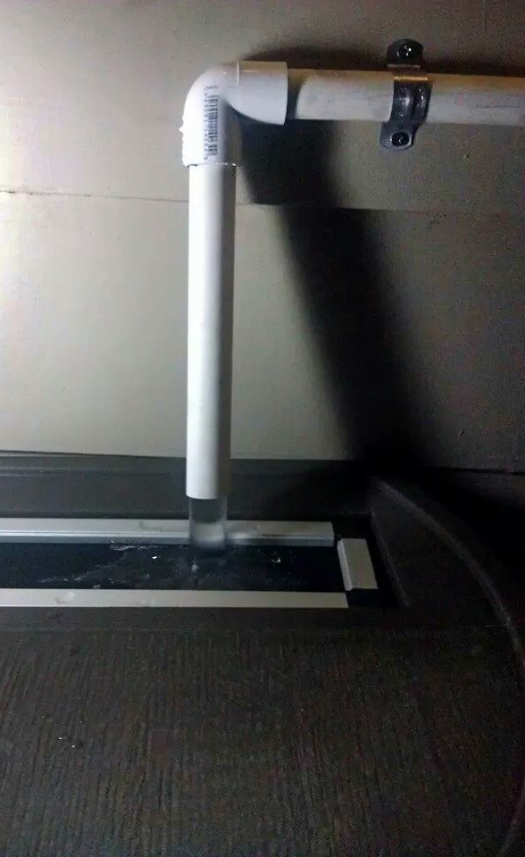 Look at that liquid gold! With every drop I could hear the “cha-ching” in my head. I quickly began to realize just how much water my washing machine uses. I had no idea it was so much. That barrel fills up fast! I began to lament for past Jim and his foolish ways. I thought, “past Jim, you owe present Jim an apology, and future Jim, you owe present Jim a high five.” I often refer to myself in this fashion. For example, When past Jim has too many scotch beverages, he angers present Jim and disgusts future Jim beyond reproach. You should adopt this inner monologue, it helps to avoid taking direct responsibility for poor judgment!

Now, where was I? Oh yeah, the savings! So, I use the water mostly for the garden, but also for the compost bin and to spot water whatever plant needs it. I also invested in a water probe to make sure that plants need water when I think they do. Some plants give easily visible signs of thirst, other plants are liars. I can now really stretch my water budget in a truly responsible way. The whole project only took about 30 minutes to complete once the parts were a’gathered. The whole project was completed for around $45 and I’ve done the math and I save about $3 to $4 per month on the water bill which means the system will have paid for itself in 11 to 15 months! Next step is to crawl under the house and reclaim the sinks and shower water, but it’s dark down there and I won’t say I hate spiders, but I do seem to feel better when they’re not around.

0 Replies to “DIY Greywater System: Save money, save the world!”

What's on your mind? Cancel reply