How appropriate that the above excerpt from the poem To a Mouse, on Turning up Her Nest with a Plough was written by a farmer while he was still holding the plough. He had just destroyed a mouse’s home right before the winter. You may recognize it from the wonderful Steinbeck novel, Of Mice and Men. Basically it translates as the best laid schemes of mice and men often go awry. And so it goes for me.

I don’t know how you like to spend your Sunday mornings, but I really enjoy eating crow. At least I seem to really like doing so because I do it so often. My hindsight is that of an eagle with laser vision surgery but my foresight amounts to something resembling Ray Charles with dark shades in a dark cave. At night.

Apparently I really really really enjoy spending countless hours on back-breaking landscaping efforts only to have them come back and bite me in the ass. Good exercise, terrible gardening. Does life grade on a curve? I hope so because I’m bordering on the fail side of pass/fail. I need to remind myself that having additional chromosomes is not a bonus, but a hindrance.

In short, I’ve done it again. I f’d up. Why break tradition with my usual faux pas? Like when I spent days making a gravel pathway the wrong way. Why quit when you’re behind?

My water feature has quickly become THE most annoying landscaping feature in the known universe. I’d rather try to terraform Mars with nothing but rusty scuba gear and a bag of cow shit than spend any more time with that beautiful beast. I’d probably have more success.

By the way, did you know that the movie The Martian was based on me? A goofy white guy in a foreign neighborhood trying to grow some food. It’s a metaphor for Mind Your Dirt. Do you think I saw a penny of the box office cash? No. No I did not.

So here’s what I had to wrestle with on this chilly Sunday morning. The invasion of the roots from my willow tree that continuously sneak into my water feature.

And this is only after two months of letting it go!! I’d walk past the waterfall and look at it and sigh deeply. Then I’d scurry off to another project on the other side of the yard. You see, this represents a much larger concern for me. There is a certain finality that I need to come to terms with. One of the two item needs to go away.

But I love them both. The cool babbling waterfall with gentle hummingbirds bathing in morning light or the gentle whispers of the swaying willow tree. The two can’t live in the same area without some major and constant maintenance. I could disassemble the entire waterfall and rebuild it in a fashion that blocks out all roots. But OH MY GOD, that will take a lot of work and my back will be aching for weeks. Some of those rocks are over a hundred pounds. I remember all too well how much effort it took the first time.

And even if I do do that (hehe doodoo), roots have a nasty way of breaking through any barrier. And willow roots are particularly tenacious when a water source is nearby. It’s what they do! Holy hell, does this tree drink some water!! Smart addition for the yard in a drought-stricken SoCal climate huh?

At this point, I’m MORE than willing to entertain any ideas that you might have!!! This is me asking you for help! Because AARGHHHH!!

As it stands now, I have to get in there with clippers at least once a month and cut this beast back. I just removed a lower slate rock so I can get better access to it. Luckily it wasn’t too hard to remove thanks to my excellent Jenga skills. Observe…

But it could’ve been a nightmare situation if I lost this particular game of Jenga as I would’ve been buried under tons of rubble. But gardening without danger is no fun at all!

Here is the water feature with a low water level and a haircut. 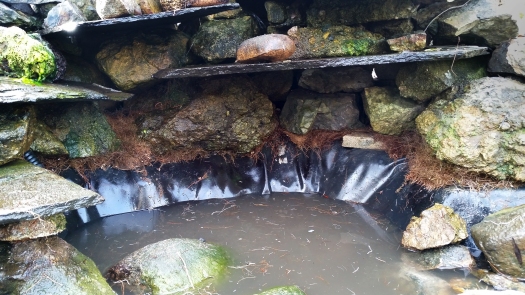 It matters very little as this is the Task of Sisyphus and they will just return in short order. This time around, I have removed all of the rocks that normally hide the rubber lining because the roots completely encapsulate every last one of them anyways. Part two of this project included me tearing away in hopes of reclaiming my precious stones. Now, I just don’t care about the rubber lining showing. When the waterfall is full, you can’t see it anyways.

If you stare at this photo long enough, you can see the tendrils growing before your eyes. Evil and invasive things that should do as their brethren do and stay below ground! Just watch…

There! Right there! Did you see it? There are some days when I feel it would be best to get my hands on some enriched uranium and just nuke the whole yard. I’ll sit on the back porch and just watch it glow all purdy like as I scratch my butt with my extra flipper arm that has just grown out of the back of my head. Big deal. Who cares.

So, that said, I’m certain you can gather my current state of mind on the whole torrid affair. What advice can you offer? Help me Obi Wan, you’re my only hope (brace yourself…).