Day I: In which noodle was scratched and there were many distractions.

Well campers, it looks as though my little experiment in the veggie garden has moved on to phase two. My hope is that the soil has been rejuvenated by my planting back in November of buckwheat, ryegrass, clover, oats, rye grain and valley peas. Deep root plants as well as nitrogen fixers have been working hard over the past few months replenishing lost nutrients from the previous year as well as aerating the soil to make room for new roots. You can learn about how I began this process, as well as some more info on green manure, in the first part of this project found here.

Using green manure is a new practice for me. The San Diego summers get awfully hot in my neck of the woods. I’ve been trying to combat this hot dry weather with some grey water reclamation and micro irrigation systems. Now that the soil below the surface has been treated, it’s time to move on to above ground. The plan was to chop up everything and use it as a mulch to help lock in the moisture and eventually break down into a nutrient rich compost.

I’ve basically just let it grow over the last few months. And it definitely did just that. Check out this vigorous growth!

I have to admit, when I started this whole affair, I pictured myself swimming in fresh homemade rye bread, gallons of oatmeal and plates of delicious peas. Yeah, not so much. They did grow a wee little bit. Like this…

But my yield was less than desired. I walked away with this when all was said and done.

Not the prize yield I was hoping for, but just between you and me, I kinda hate peas. Mushy bland and super boring. So, no great loss and these little babies went to the chickens to turn into eggs, which I will eat. So no loss at all. This planting was for the soil and not for me anyways.

Once the massive harvest was completed and I paid and dismissed the migrant workers from the vacuous fields (peas of wrath) and took a step back to try to figure out my next move. The brush was so thick, I didn’t really know where to start.

After some considerable noodle scratching and numerous smoke breaks, I decided to just start at one end and snip away with my gardening shears. I went at it like I was shearing a sheep for its wool. Not that I’ve ever done that before, being a city boy, but it felt like that’s what I was doing.

Like a massive haircut, or manscaping the Jolly Green Giant. Yeah, I went there. Tell you what, I’m going to go another step further and provide you an illustration of this less than pleasant metaphor. Why? Because I can!

Mwahahaha! My maniacal laughter should be proof enough of the, shall we say, mentally divergent dark hallways of my mind. Believe me when I say that you, dear reader, get the PG version. Where was I? Oh yeah the harvesting…

So then I had this big ol’ pile of green whatsits. I knew I needed to get it all chopped up for better breaking down as a green manure, but wasn’t sure how. I don’t own a power mower. I’m a bit of a luddite when it comes to that and much more prefer the quiet, peaceful and James powered push mower. Which would never work on this stuff.

I do however have a mini chipper which I use from time to time for the compost bins. It isn’t very heavy duty but functions well for small sticks and twigs.

I got this nifty set up a’going for some full powered mulching. At least that was the plan. The reality was less than awe inspiring. It almost immediately clogged up from all the wet green materials. In fact, it’s still clogged to this day! I was so instantly disappointed in its “performance” that I’m punishing it by leaving it in the garage clogged until it has learned its lesson.

Another example of my mental divergence; I punish inanimate objects and truly believe that lessons will be learned. My surround sound speakers are currently in a permanent time out until they can play well with the other speakers. I also have, or had rather, a computer that I drove a metal stake through its heart for constantly disappointing me. I could’ve repaired it, but the satisfaction of dispatching it like a creature of the night was just too much to resist.

My next attempt was with a weed whacker. That proved wholly more effective and I finished the job in short order! 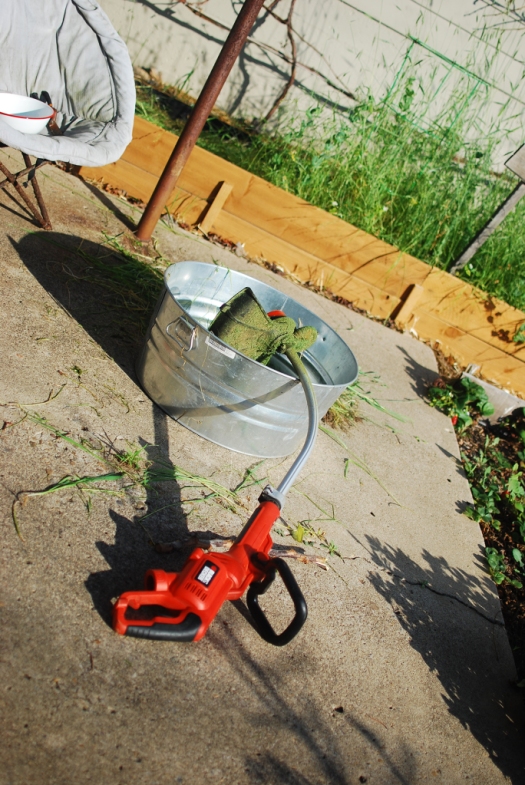 That was like making a giant batch of soup. A giant green messy batch of gross soup. With the task at hand completed, I began to lay out the fresh green manure all about the slightly raised bed. 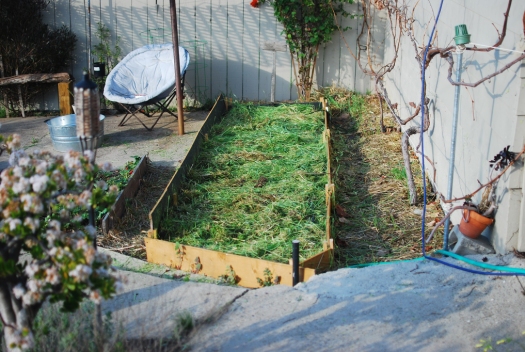 My next plan was to build some sort of teepee that could support some acorn squash and cucumbers. Maybe some watermelon, although I’ve read that cucumbers will tweak the flavor of watermelon if planted to close together. Can anyone confirm or deny that for me? In order to get the teepee going, I needed some big branches.

So, I climbed the neighbors pepper tree. I’ve been meaning to get up there and saw off all the branches that hang over my lot in an effort to keep that foul demon tree from poisoning my dirt with its peppery evil. I climbed up to the tippy top as well. I could clearly see that I was up higher than my rooftop. I was also wearing slippers and had a cigarette dangling from my lips. You see, I garden with danger!

Several chops later, I have some nice branches to twine together. I wanted a rustic and natural teepee instead of something milled and all purdy like. The results you ask? Thusly…

Pretty sweet for free huh? One plant per tripod and it should prove to be the lovely little space saver. I’m sure that the whole thing will be vastly overgrown in no time at all, but for now I’m happy with it. 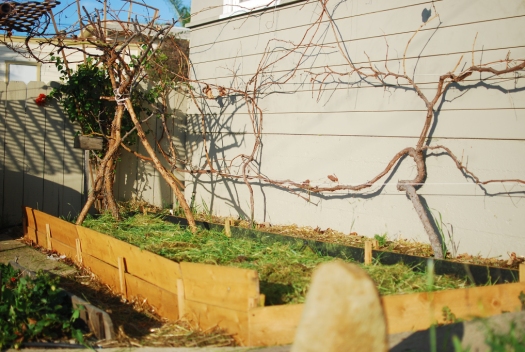 Now I had a bed that was ready to accept plants. But…I didn’t have any yet. Oops, I maybe could’ve prepared better. Oh well, I did have some soybean seeds that I could plant, so they’d have to do for now.

While I was sowing these seeds, the sky began to grow dark and I began to feel a few sprinkles. My long day was coming to an end. When I finally looked skyward, this was what I saw. 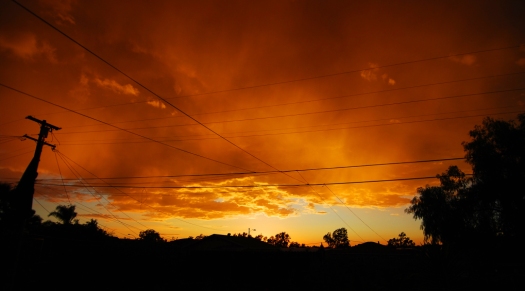 You gotta love San Diego in the winter time! No seriously, you have to. You’ll get murdered for complaining about the weather here. I’ve already said too much. At this point, I decided to take a little “enjoyment of the nature” break. When I turned around and looked towards the back of the house, a double rainbow was waiting for it’s much deserved attention. I provided it.

The photo does not do this justice, but you can kinda make out the secondary rainbow above the first one. And with this lovely view, the fading light and a severe lack of plants to plant, I decided to call it a day and head inside to give Sasha many scratches and belly rubs. A farmers work is never done. 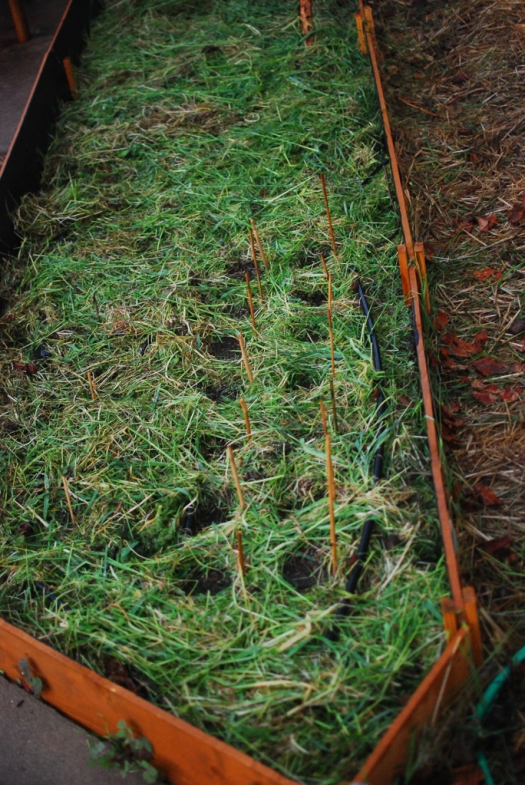 Day II: In which supplies were properly procured

I then made a trip to Walter Andersons Nursery (an awesome local non-chain nursery that supports local growers and has oodles of organic materials as well as a bonsai section!). Man, I love that place. But it really puts a huge dent in my checking account! There must be a support group I can go to…

Regardless, I bought seeds for watermelon, acorn squash, carrot and cucumbers so I could start those indoors. I also got some starters of romaine lettuce, swiss chard, marigolds and some blue borage. The later was for attracting pollinators and is a wonderful companion plant that also makes for a tasty treat or a gorgeous salad accoutrement. If you’ve never grown borage, get on it!

The soil was so loose, rich and moist I am certain that this years harvest will be a bountiful one. I used a little scoop to plant the babies, but I just ended up using my hands. Better connection to the task I feel. Now this is a long post, and you are most likely checking your FB status at this point so I’m gonna blast you with a gallery of the images so I don’t lose you too soon. Ready? Here goes…

Whew, that was a bunch huh? Thanks for hanging in there. The green manure was tucked in around the plants all cozy like. I even read them a bedtime story. After everything was all snug and well planted, I gave them all a good drink of water.

I’m pretty sure that this step didn’t require an illustration, but I liked the bokeh  that was created in the photo and wanted to share it with you. That said, the above illustration shows the proper way to…well, hold a hose I guess. If you are holding the nozzle towards your face, you are doing it wrong. See, we are learning stuff today!

And here is the finished results! Now it’s just the waiting game.

Over the next few days I checked on the moisture retention and was so pleased that even though it was in the high 70’s and super dry (sorry rest of the country, I know you’re getting pounded with snow) the soil under the green manure was still really moist. I could tell already that this was going to work smashingly. In the two weeks since I’ve planted, my seeds have sprouted and been transplanted into the bed. The romaine and borage has exploded with growth and the romaine is a beautiful dark green color. The soybeans however never properly germinated and will be replaced with some carrots next weekend. Well, that’s about it for this meaty post. Did I lose anyone? I promise, the next one will be shorter and perhaps a shade less lofty. Maybe.